How do you steer a Hot Air Balloon, where will we land?

The most common question asked of a Balloon Pilot is: How do you steer this thing and where are we going to land? The answer is not always as simple as giving a specific location. The comic answer is “on the ground”. I have been known to answer well over a few thousand times with “I like to think of a hot air balloon flight as the old fashioned Sunday drive. You never know where you are going, how long it would take to get there or what you would see along the way”. In the backseat we yelled to Dad, “Are we there yet”? In a balloon we don’t want it to end. The best answer is, we have several landing sites we use where the land owner has graciously given us permission to land and access with our Crew for retrieval of the passengers and equipment. The method we will use to steer is to choose a variety of altitudes over the flight duration to steer to a predetermined safe landing site.

What makes a good landing site? From the Pilots perspective, a good landing site is a location with good access from the air using wind conditions to navigate safely into without jeopardizing passengers, crops or animals, large enough to fly into in variable wind conditions, with safe terrain features for passengers, crew and vehicle to move about and importantly a place where our landing is welcomed and does not interfere with landowners privacy or fear of risk. Whew! That’s a lot to consider. 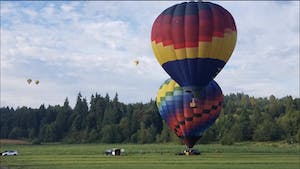 Hot air balloons have no built-in mechanism for steering or propulsion. It uses the speed and direction in which the wind travels to move. However, that does not mean that pilots let the balloon amble anywhere. At different altitudes, the wind speed and direction are different. Pilots place the balloon at different altitudes at certain times in the flight to change the direction of the flight path. Operation of a hot air balloon is done by the Pilot controlling the temperature and volume of the balloon adding heat to go up, maintain level flight and slowing the balloon’s descent rate. Changing the volume of the balloon by opening a large vent in the top center of the balloon allows the Pilot the ability to start a decent, valve off excess heat and make the balloon heavier for landing. Prior to flight a Pilot gets information about the direction of surface winds at different altitudes from weather sites such as nearby airports, local home weather stations reporting online and weather service forecasts. At the launch site a Pilot lets go small helium balloons for an actual observation of current wind condition over the intended flight area.  Routinely a Pilot understands the local flying conditions and air flow in the area being flown to plan a flight path to a variety of good landing sites. Using personal observed conditions and understanding the overall weather patterns during the flight period, before launch Pilots determine the best case scenario of winds, altitudes and terrain of the intended flight to navigate to good landing areas. 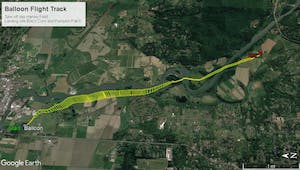 Pilots will regularly cancel a flight when suitable wind speeds and directions are not in place for a safe flight path to good landing sites. It is always a difficult decision to cancel a flight, especially when passengers are present and the excitement of the upcoming flight is high but cancellation is always in the best interest of the Pilot, passengers, crew and landowners when a safe flight plan cannot be determined in advance of launch.

Hot air balloons are clearly not designed for long distance or specific air travel. A Pilot cannot deviate from the actual wind speed and direction except to terminate the flight and land. Should the directions or speeds become undesirable or head in the direction of unsuitable areas for safe landing the best decision is to land when able and where it’s safe to do so. In this opportunity the Pilot may or may not have advanced permission to land or access the property so it becomes necessary to locate the owner and obtain permission.

The precautionary landing decision sometimes means meeting a new landowner, clearly and respectfully explaining the precautionary need for landing and pack up and understanding any concerns the landowner may have for their property, animals, crops and privacy. In most cases the landowners are very welcoming and permission is quickly given. This is not always the case and the occasional landowner can be unhappy with the interruption of privacy and concern for animals and property obstacles.

Hot air ballooning has been determined by the NTSB (National Transportation Safety Administration) as the safest way of manned travel. This is due largely in part by the safe decision making process of the Pilot and crew. Ballooning is a “Fair Weather Sport” and totally dependent on suitable weather conditions for safe and enjoyable flight. The intent of a hot air balloon flight is to enjoy the serene and peaceful feeling you get when flying mans oldest and most primitive form of flight.

I hope you enjoy your flight.

Sail with Snohomish Balloon Ride aboard a colorful, nine-story balloon as gentle breezes carry you over the spectacular Snohomish valley and enjoy a stunning sunrise or sunset.